Last week’s blog, inspired by the Guildhall Art Gallery (11 May – 28 October 2018) exhibition of the work of the artist William De Morgan, looked at symmetry, patterns, and working in three rather than our more usual (for technical analysts) two dimensions. As promised, today we introduce his incredibly talented father who inspired William’s love of maths.

Augustus De Morgan (1806-1871) got to grips with mathematics early on, allegedly enjoying Euclid of Alexandria’s book The Elements as bedtime reading. This Greek genius, who was born about 300 BC, went on to inspire Italian Fibonacci (of the golden ratio fame) who also studied in Alexandria. Augustus, on the other hand, studied at Cambridge where his talents were quickly spotted. He could have stayed on and taught there, but decided against it because he was an atheist.

Instead, at the ripe old age of 21, he applied for and was unanimously elected as the first professor of mathematics at the newly created University College London – where he continued to teach for the next 30 years. Talk about tenure! Based in what is today the Senate House building of London University, they were known as ‘the godless of Gower Street’.

He was described as ‘eccentric and brilliant’ and an ‘unrivalled teacher of mathematics’, and inspired legions of students, some of whom went on to be highly regarded in their field. Along the way in 1865 he founded, and was the first President, of the London Mathematical Society – one of the oldest in the world (a bit like our own Society of Technical Analysts). Like the STA, De Morgan’s aim was to disseminate and promote mathematical knowledge, resources for which were generated through publishing, fees and endowments. In the most recent UK financial year to 2017, it distributed £646,000 in grants supporting research. 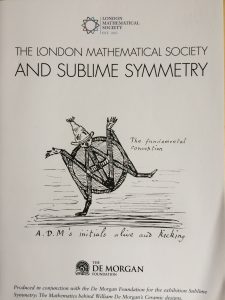 A friend of the family’s who was a logician and fan of Euclid was Charles Dodgson (1832-1898) who spent his life teaching maths at Christ Church, Oxford. His suite of rooms in the college was decorated by tiles made by William De Morgan, and he was aware of Augustus’ penchant for drawing cartoons in books and letters, humorous writings and love of anagrams. It is said that father, and son with his heraldic and fantastical beasts, inspired the poem The Hunting of the Snark by Dodgson – AKA Lewis Carroll.