IG TV host Jeremy Naylor this week invited Fellow of the Society of Technical Analysts, Nicole Elliott, onto IG’s regular slot looking at the week’s markets from a chartist’s perspective. Both agree that Brexit is dominating the headlines, Britain’s Supreme Court forced to make a decision on prorogation of Parliament at Westminster, possibly caused by PM Boris Johnson driving with a ‘’no deal Brexit in the boot of the car’’ to Luxembourg.

Using her favourite oscillators – the MACD and momentum – she looks at key stock markets and exchange rates, with an unsurprising focus on the pound. These ‘’secondary measures’’ as she calls them are one step removed from the action, being a mathematical manipulation of price data, and therefore don’t have the ‘fear and greed’ grist that raw prices have.

She then slips into the current meme, which is a Brexit deal. ‘’Do deals as you go along; renegotiate business contracts and suppliers’’. While not exactly technical analysis, it does echo the theme of the industry which is: watch for patterns and potential outcomes, preparing for success (and avoiding failure) as you go along. Be flexible.

While believing cable can go higher because it’s still very cheap, she feels it’s time it took a breather; likewise EUR/GBP which has a ‘’Mont Blanc’’ peak: AKA inverted V-shaped formation. Equally creative with her gold pattern – ‘’a sort of Lego-blocked head and shoulders’’ she suggests ‘’the stairway to heaven is sort of faltering’’. 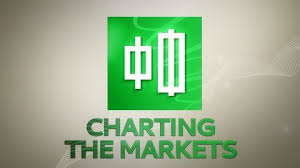