A fireside chat with author Jack D Schwager: He of Market Wizards fame

Hosted by Steven Goldstein, and timed to coincide with the launch of his latest book, this eagerly awaited event aired yesterday the 10th November 2020 with only the tiniest glitch. Of interest was that this (virtual) STA monthly meeting was also open to non-members to view.

Jack’s first book, ‘Market Wizards’, was published in 1989 and took the trading world by storm; I know, because I still have that original version. Three decades on, three subsequent books, and now ‘’Jack is back with his latest version’’, says Steve. Published this month by the UK’s Harriman House, ‘Unknown Market Wizards’ includes the profiles and interviews of ten traders, two of which 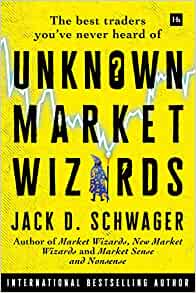 were introduced to Jack by Steve. Cooperation and collaboration at its best.

According to the author the reason his books have done so well, and have been read and re-read widely, is not down to the characters themselves, but because the essence lies in the concept of risk management. The traders explain how to remain flexible, the importance of discipline, just how hard the work is, and their methodologies. These must match the people they are, so none are the same – yet the unifying thread is risk management.

Too many traders believe it’s ‘’all about finding a secret strategy; they are all wrong’’. Here I agree with Jack. Too many start off thinking that trading is easy, and making money is like picking candy out of a baby’s mouth. Then many move on to optimising automatic trading systems – which quite frankly is akin to alchemy and finding the Holy Grail. Jack takes this a step further saying: ‘’if you have no risk management then it’s just a matter of time before you blow-up’’.

He dismisses concepts like the Sharpe Ratio outright, and in this book he has a chapter called ‘Neither’ – not fundamental analysis nor technical analysis. Today he favours monitoring social media, looking for abnormally high coverage of a stock or a market. When learning to trade, ‘’always start with a small amount because the vast majority at first do not succeed. You don’t want to risk too much so that you don’t get another shot’’.

Judging from what I heard yesterday, I think I’ll give Mr Schwager another shot and buy his new book.